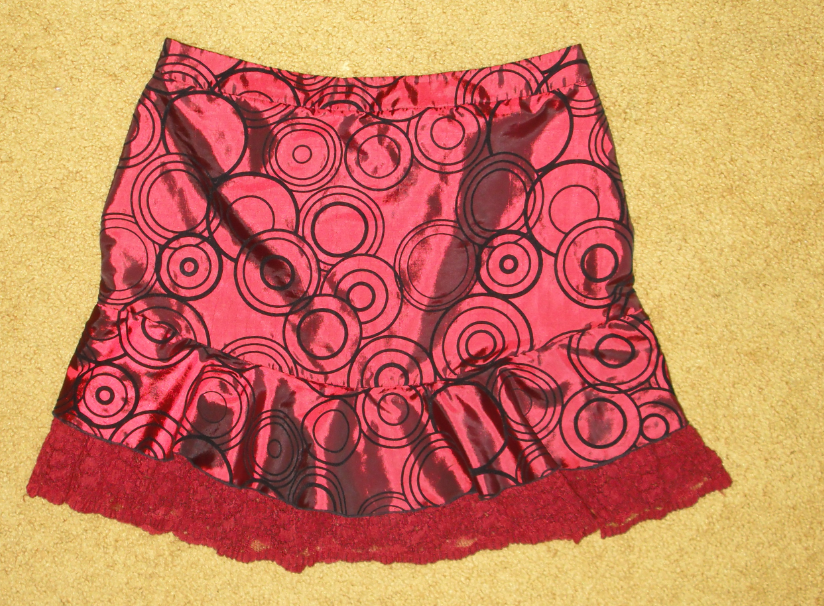 I got this skirt for $3 at a thrift shop earlier this month; it appears to be handmade. The fabric is a slightly strange choice for clothing: it’s a light polyester of some kind, metallic reddish-purple, and the black pattern is a slightly raised velvet. The only item I own that this material reminds me of is my shower curtain. Heck, for all I know, this is a former shower curtain that someone refashioned. I keep wanting to stick it under a faucet and find out whether it repels water.

Regardless, it has an awesome pattern on it – as usual, I’m a sucker for playful geometry – and I love the flounce, so I’m determined to salvage this. It needs some work for sure. The lace at the bottom is a creative addition, but in my opinion it’s incongruous enough to be slightly unfortunate. There’s a bit of wear along the side seams, and the skirt is too big for me anyway, so I’ll need to take in the sides. But there’s potential here. What I envision doing is getting rid of the lace, putting in a black horizontal stripe above the flounce, and adjusting the entirety to fit me. Sounds like a plan!

In my opinion, that lace absolutely has to go. It was an interesting idea, but even disregarding how much it clashes in terms of colour and texture with the rest, it’s gotten worn out and scratchy. The geometric pattern is plenty on its own. Yeah, enough of that.

Underneath, it turns out that the three pieces of the skirt are all serged together, so I unpick that seam.

Which yields the main skirt, the flounce, and a long loop of lace that will not be seen again. 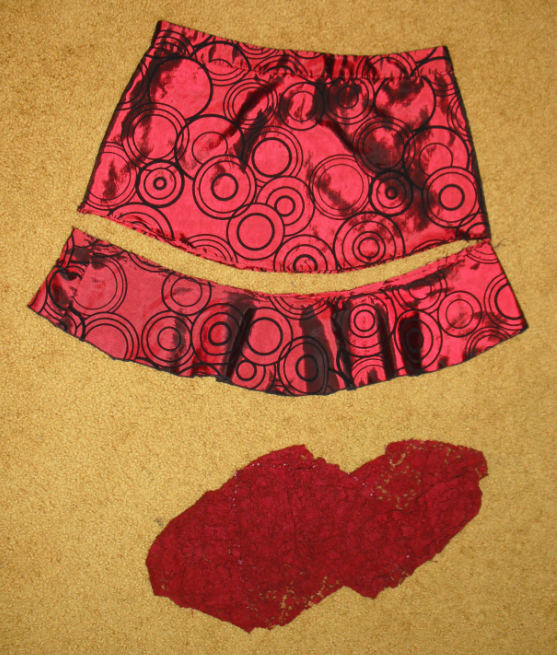 Now, the first thing to deal with is adjusting the fit. I try on the skirt, secure the sides in place with craft clips, add seam-allowance, then measure the new placement of the sides and cut with my French curve. For now, I leave the skirt maximally flared – that can be adjusted later if need be. 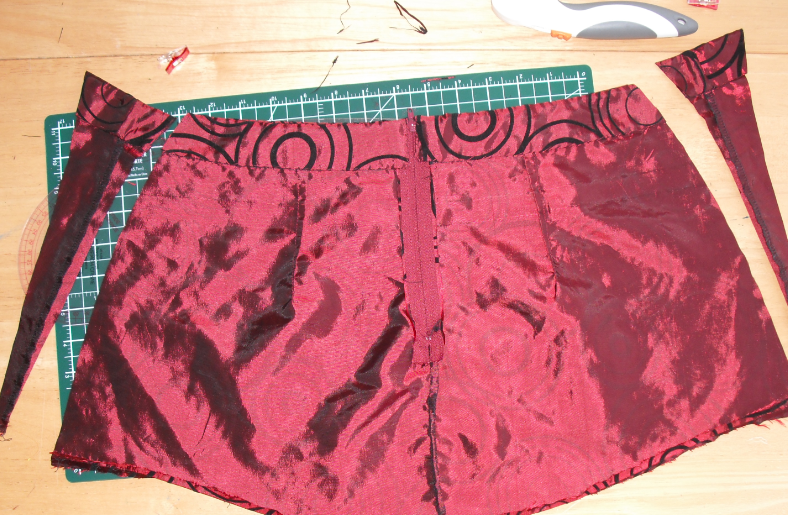 The bottom of these pieces is cut along a pretty dramatic sine curve. I’m not sure I like that, and I’m aiming to add length anyway by inserting a horizontal black panel somewhere in there, so I recut the pieces to be more conventional. 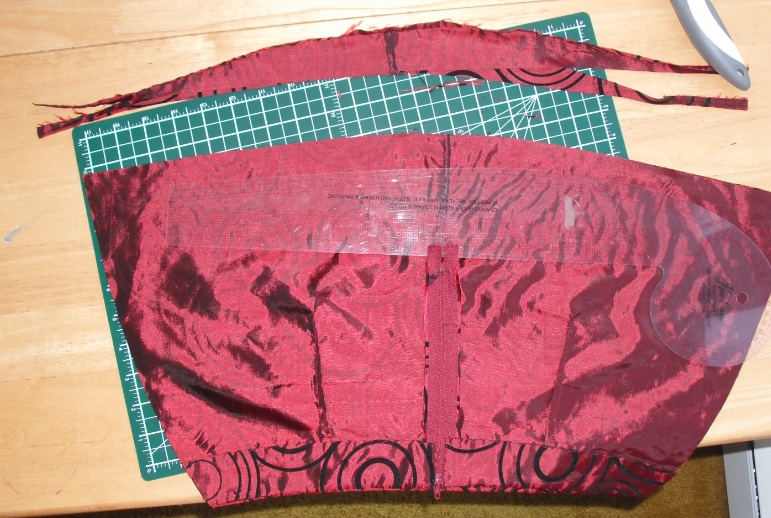 Now we need some black polyester. I root around in my scrap-bag and find this piece of high-end stretch fabric from a pair of pants that my sister had me convert into shorts after she ripped open one knee. 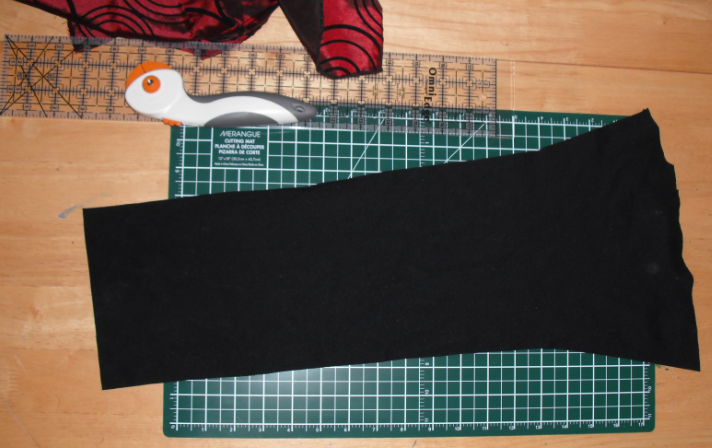 First I cut it in half. 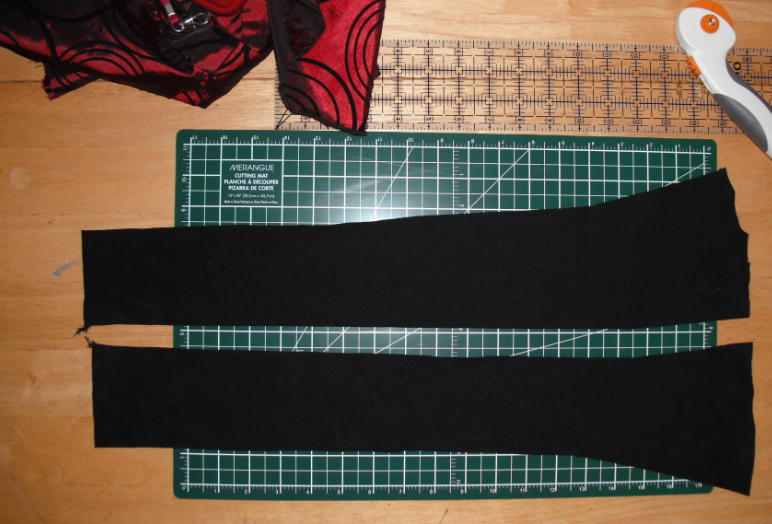 Then I measure out two pieces to attach to the front and back pieces, and cut them a bit larger than what I think I’ll need, especially at the sides where I might find I need some extra space.

The idea is that they’ll be attached as follows.

I baste the pieces right-sides-together to the front and back sections. 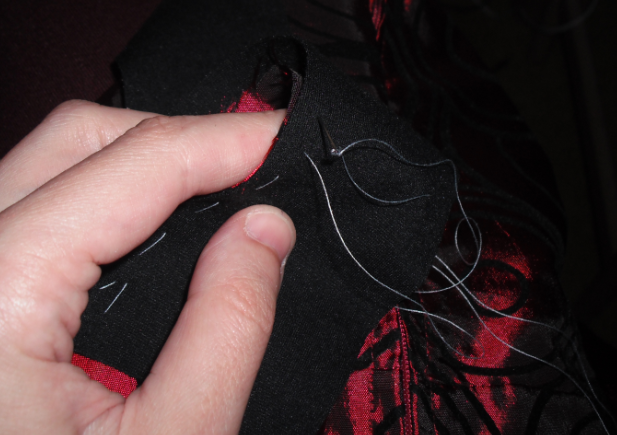 So far so good.

I sew that into place. 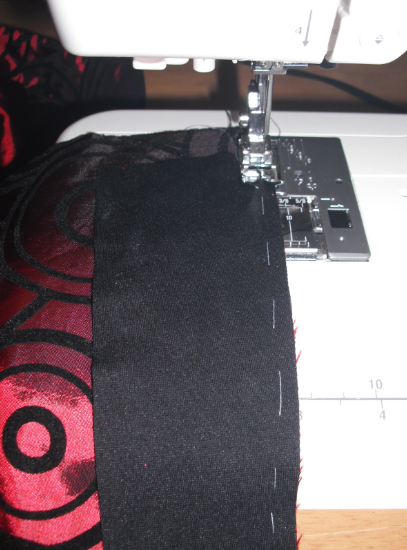 And remove the basting stitches from underneath. 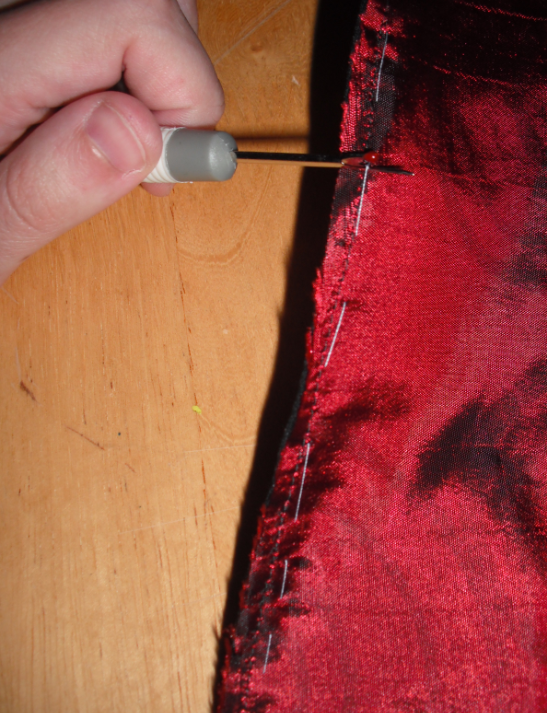 Then I fold the stripe down and topstitch in order to keep the seam lying flat. And for aesthetic reasons!

The back piece presents a challenge: I didn’t notice that I sewed it into place across an old centre-back seam that was in the process of coming apart at the bottom. I consider the options and opt for a slightly dramatic one…

I cut the back polyester panel, fold the seam over, and baste it to itself.

Then I sew it down.

And unpick the basting, and zigzag the inside of the seam. This means it’s no longer obvious that the centre-back seam in the red polyester was being pulled apart while I joined the black stripe to it. Fortunately, I didn’t end up regretting making that cut!

Now it’s time to deal with the side seams. The only problem with the black polyester is that it isn’t quite as wide as the red polyester, which means this is no longer going to be a flared skirt. More of a pencil skirt. But that’s okay! I measure and cut the new sides on the front and back pieces.

Then I baste the sides together. 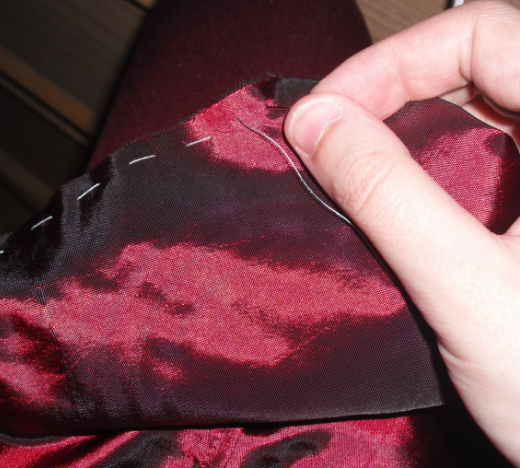 And sew some narrow (1/4″) side seams, because it’s almost too small as is.

Then I take out the basting stitches, zigzag over the edge, turn the skirt right-sides-out, fold the seam to the side, and topstitch it in place. It’s slow-going over the curve. 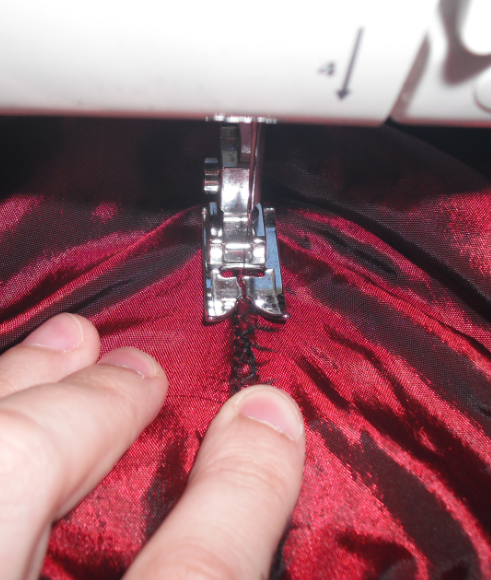 But it creates a tidy result, which was the idea. 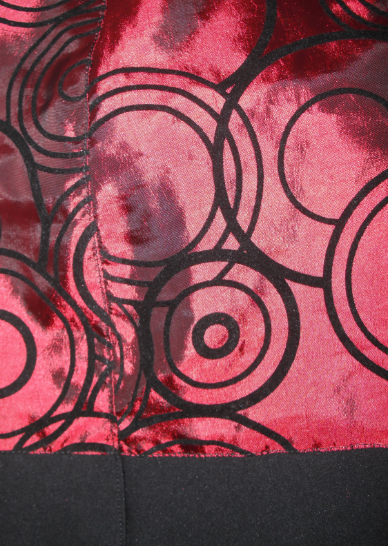 Now the sides are done. Note that the black panel still needs to be trimmed to be more even: right now it continues to be a little longer at the sides than in the middle.

Above, you can see that I made a subtle mistake. The greatest degree of…flounciness, I guess…is in the middle of the flounce piece. Each of the original sides is flatter. I didn’t notice this – when I held up the flounce, it looked like a big circle, so I guess I didn’t see that it was a subtle ellipse, i.e. with the degree of curvature varying a little bit. This means that I thought any arc would be just like any other arc along the ellipse’s length. So I figured I’d be all clever and reuse one of the original side seams. The other one I just cut off, and then I sewed the flounce closed again at the new seam. This would come back to haunt me a little bit. The result is that one side-seam has much more flounciness than the other one – different degrees of curvature that I didn’t notice. I ought to have cut the new flounce pieces in the middle of the old flounce piece rather than lining up one of the original sides. Also, there is a subtle issue in that I folded one of the side-seams toward the back of the garment and the other toward the front – extremely minor, and not readily visible from the outside, but also not as symmetrical as I intended. Small issues, of course, and not enough to make the skirt unwearable. But worthy of note. 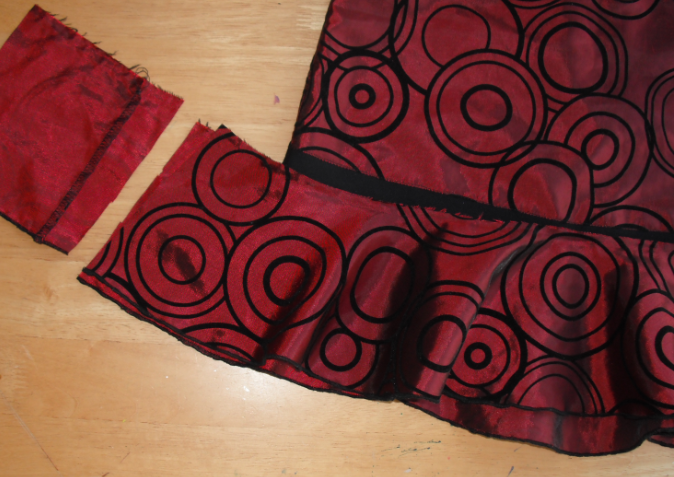 For now, though, I measure about 1.5″ all around the black panel, then trim it and baste the slightly smaller flounce in place.

Then machine-sew over it, take out the basting stitches, then topstitch as before.

So yeah. Not perfect, but definitely really good. It fits well, especially along the side seams. I love that black stripe. In sum, I like it enough to wear it. That’s always the goal here. 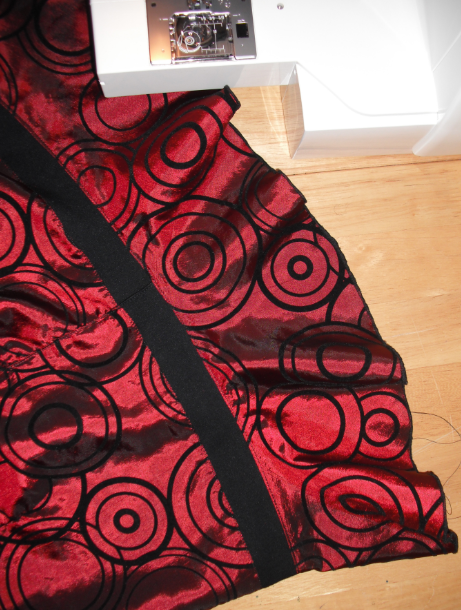 I wear the skirt out in public on the 19th of April. A very kind stranger in a shoe-store compliments me on it, which I really appreciate. Thank you, lovely stranger!

And then I go to the fabric shop and this happens.

That’s me sort of half laughing and half going, “…really?” Evidently what happened is that someone bought some of this fabric – recently – and tried to make a skirt out of it, but that didn’t go well and the skirt ended up at a local thrift shop.

On the plus side, I spent a lot less on the material than I would have at the fabric shop. And now I know that the skirt probably didn’t begin life as a shower curtain. Plus, if I ever want more of the same, the fabric is available in at least three additional colours.