For a while I’d been entertaining the idea of making some kind of ‘autumn’ costume. The only problem with this plan is that brown is the colour I wear the least often by far. So I needed some strategic wardrobe augmentation to make this work. Got this skirt for $6 at a Kind Exchange in Toronto in 2015 and went from there.

I decided I wanted to put a circle of leaves around the waist. My first try at this involved buying a couple of old shirts and cutting leaf shapes out of them, but these ended up looking limp and uninspiring. I didn’t particularly want to have to play around with e.g. wire in order to make them work. So the entire attempt ended up going into the nearest textile-recycling bin sometime in the second half of 2016. And then the whole costume idea was on-hold indefinitely.

But I ran into some luck at the Bloor/Lansdowne Value Village in March 2017. Luck in the shape of leaves.

These were just hanging around in the ‘home textiles’ section for $2.50 each, and are both large and sturdy (polyester suede in two layers). I originally thought they were intended to be novelty tea-towels or something, but my sister pointed out that placemats were a much better guess. Either way, exactly what I needed. I love that there are exactly enough for a circle of leaves around the waist of, say, a brown skirt in a North American size 8.

Now for a top. The one I originally had in mind is sparkly and fun but way too summery to be practical in late October. So while dropping off a box of donations to another Value Village in October 2017, I ran up and down the aisles of women’s long-sleeved tops and pulled out an olive-green tunic-top from Ricki’s with gold beadwork around a V-neck opening. Didn’t have time to try it on, but it was a medium and likely to work. Grabbed it for $8. Trying it on later, I found that the only issue was that the sleeves were too long for me. I considered just cutting them, but didn’t want to have to deal with redoing the sleeve ends. Instead – especially since it was now the late evening of the 30th of October and I was also packing to leave for a conference on the morning of the 1st – I folded the sleeves in on themselves upward and hand-sewed each one in place around a circle of piping cord. Yeah, okay.

Somewhat more of an ‘original-series Star Trek‘ look than I’d been aiming for, but tolerable in a pinch. 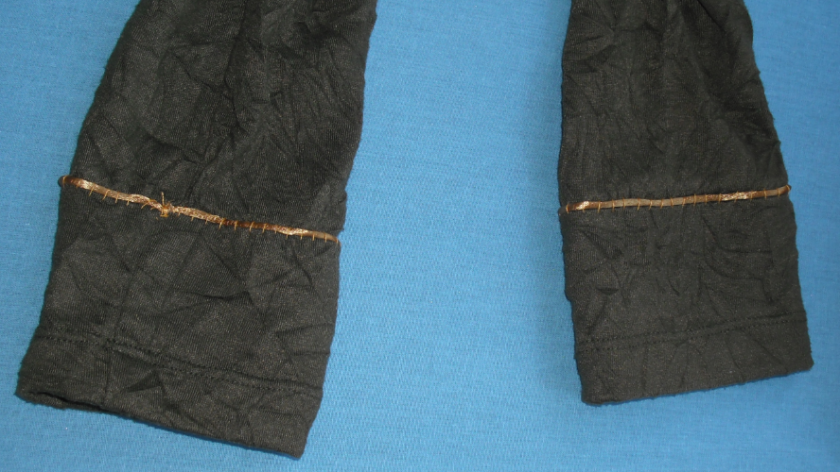 Finished that and added a shiny gold leafy headband from I-forget-which-accessory-place-at-the-mall. Over the course of the 31st it kept trying to fall off my head – and at $15 it was by far the most expensive part of the costume – but worked fine for the short term.

On the 31st after wearing this thing around all day I hopped a fence to take photos. Got only one, and managed not to be looking at the camera at all. Ready for the low-budget-fantasy-novel cover?

The reason I didn’t have a chance to take any more is that I literally got chased off by a couple of enormous male deer who showed up out of nowhere. Serves me right for intruding. And for pretending to be more a part of nature than I am in my day-to-day life. Heh.